5 Trading Mistakes to Avoid at All Costs

Learning to become a successful day trader takes a good amount of trial and error and no one should expect to become a market master over night. Making mistakes is simply a part of the game; consider it your tuition for the market. Certain mistakes can be used as valuable lessons, making each loss a part of your trading education. Of course, you don’t want to be overpaying for your education, as that would just be foolish. There are certain mistakes you should avoid at all costs.

Here are a few:

Trading Without a Plan

It’s always important to remember that trading is NOT gambling, and should not be approached as such. Don’t test your luck; focus on improving your odds and creating a nice balance between potential risk and reward. The best way to do this is by creating a hypothesis. A hypothesis is an educated guess (keyword being “educated”). For example, you may decide that if stock ABC breaks it’s yearly high of $100, it may run to the next resistance level at $110. You now have a hypothesis – the next step is managing risk.

In order to manage risk, you need to account for all scenarios. You cannot control the market, but you can control how you react to it. You should know exactly where you would take profits and cut losses before entering the trade.

Not cutting losses quickly is one of the most fatal mistakes a trader can make, and no trader, new or experienced, is immune. Taking major losses is a choice that is usually triggered by emotional trading. As discussed above, you should always go into a trade with a calculated risk. This allows you to know exactly what is at stake before entering a trade. If you enter a trade with a plan to risk $300, your losses should be no more than $300. If you lose any more, you ignored your plan. Avoid this mistake at all costs.

Emotions have no place in trading. You’ll never hear a professional trader attribute their success to their emotions. The second you start feeling a sense of greed or fear, you need to take a step back and reassess the situation. Break the situation down to its quantifiable elements and refer back to your initial plan.

It’s common to start rationalizing when a trade goes against you.

“Sure, the stock is down, but I think everyone misunderstood the press release.”

“This company is way undervalued – it’s due for a bounce.”

For example, if you enter a trade looking for a technical breakout, claiming that the stock is undervalued would be a rationalization that is completely irrelevant to your initial hypothesis. Contrarily, if you entered the trade because you thought the stock was undervalued, that would be your hypothesis (and not a rationalization). It’s important to understand the difference between the two so you don’t get caught up in a bad situation. 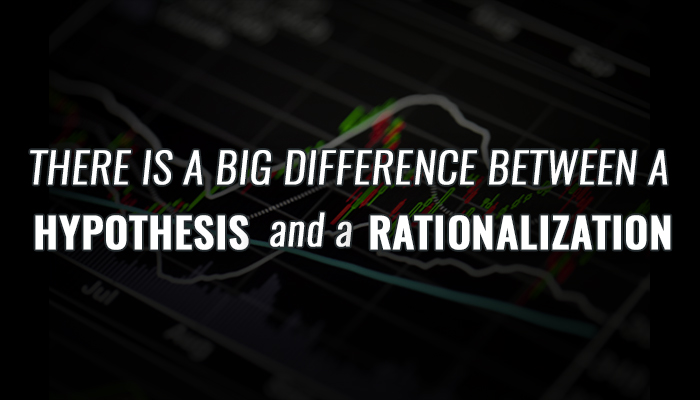 If you’re focused on becoming a self-sufficient trader, the last thing you want to do is follow anyone. You can learn from the experience and insights of others, but attempting to replicate the success of other traders is a slippery slope. You don’t become a successful day trader by trying to replicate others; you must develop your own strategy that resonates with you.

This logic also applies to following the crowd. If everyone is short-biased on a stock, that doesn’t necessarily mean you should be as well. Focus on creating your own plans that align with your strategy.

As mentioned at the beginning of this article, there is nothing wrong with making mistakes. The real problem comes in when you start repeating the same mistakes over and over again.

Mistakes can be used efficiently if you learn from them. If a trade doesn’t go the way you wanted it to, focus on why. This will allow you to draw the insights necessary to avoid this shortcoming in the future.