A History of Stock Market Crashes – What You Need To Know

For as long as there has been trade, there have been lulls and downturns in that trade. The stock market is no stranger to crashes – the global stock market sees a crash roughly once every 10 years, and there have been four historic market crashes in the past century. While many traders always have the threat of a stock market crash in the back of their minds, it’s important for traders to understand the history of these crashes so that the causes and consequences of a crash are clear.

What is a Stock Market Crash?

A stock market crash is considered to have occurred when a major market index like the S&P 500 or Dow Jones Industrial Average falls by more than 10% in a single trading day. However, this definition is flexible and stock market crashes may be identified retroactively as a double-digit downturn over the course of several days. Importantly, a crash should be market-wide, covering multiple industries and sectors.

Stock market crashes are usually caused by spreading investor panic, which builds on itself to further increase selling activity and drive the market down.

The main difference between a stock market crash and a market correction is the time period over which the downturn in prices occur. While a crash takes place over the course of a single trading day or a few consecutive days, a correction is more gradual. Stock market corrections typically take more than a week, and sometimes several months, to achieve a 10% or larger drop in the value of major indices.

Note that crashes are also different from bear markets. A bear market occurs when major indices drop 20% from their most recent highs, typically over a period of several weeks to months. While a crash can mark the beginning of a bear market, not every stock market crash results in a bear market. 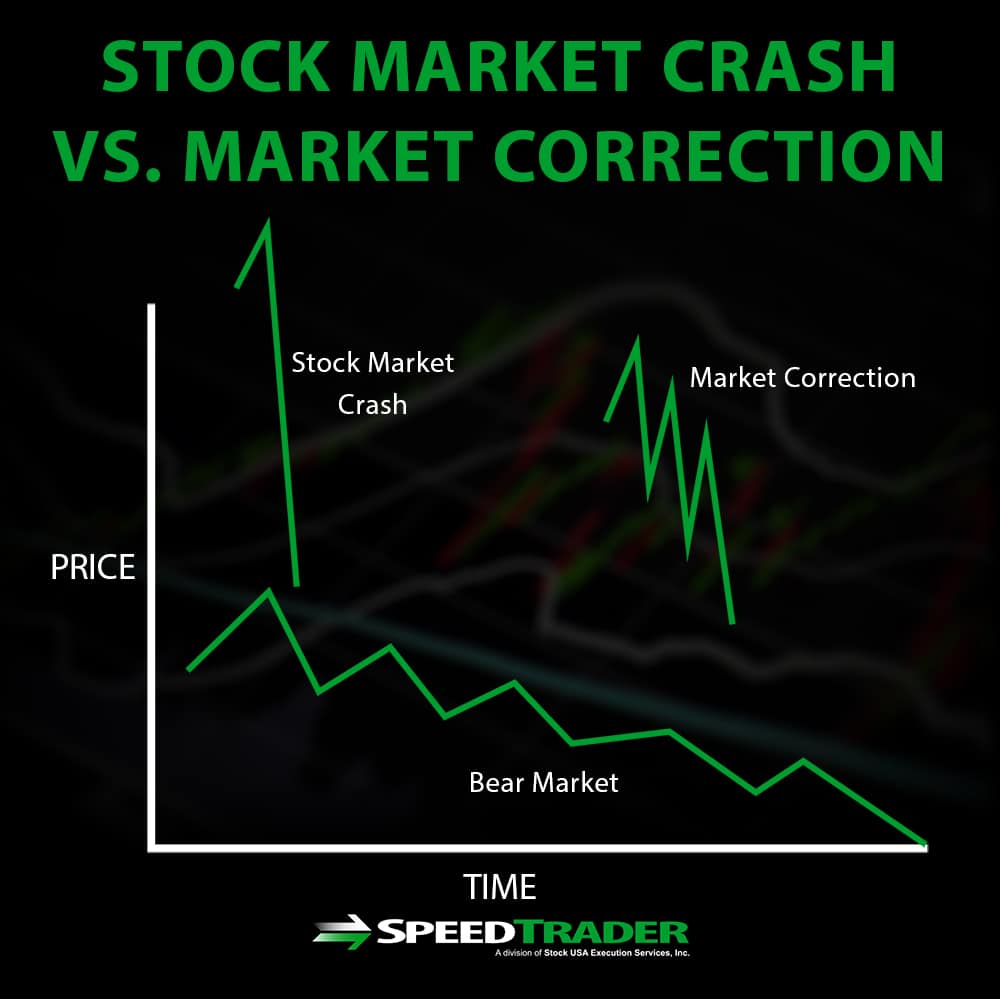 The 1929 market crash occurred over the course of four days in October 1929, ultimately dropping the Dow Jones Industrial Average by 25% and eliminating the modern equivalent of $396 billion in wealth. The sell-off began with an 11% drop on the first day, which was counteracted by Wall Street bankers buying stocks to prop up the market. However, this buying was short-lived and the Dow lost 13% and 12% on the third and fourth days of the crash.

The US stock market had been set up for the crash thanks to widespread, aggressive speculation in the market. Buying stock on margin from brokerages had been introduced in 1922, enabling investors to buy stock using borrowed money. On top of that, many ordinary people had begun investing in the market because it had been extremely bullish during most of the 1920’s.

Immediately prior to the crash, newspapers and Treasury Secretary Andrew Mellon began highlighting the extreme degree of speculation happening in the market. This sparked a public panic, which only intensified in the days leading up to the crash as papers then highlighted the increasing panic among investors.

The effects of the crash were devastating, essentially kicking off the Great Depression. Brokers immediately called in margin loans, numerous banks went out of business – taking peoples’ savings with them – and deflation reduced the value of currency. The market remained extremely bearish until 1933, and did not fully recover until the approach of World War II in 1939. 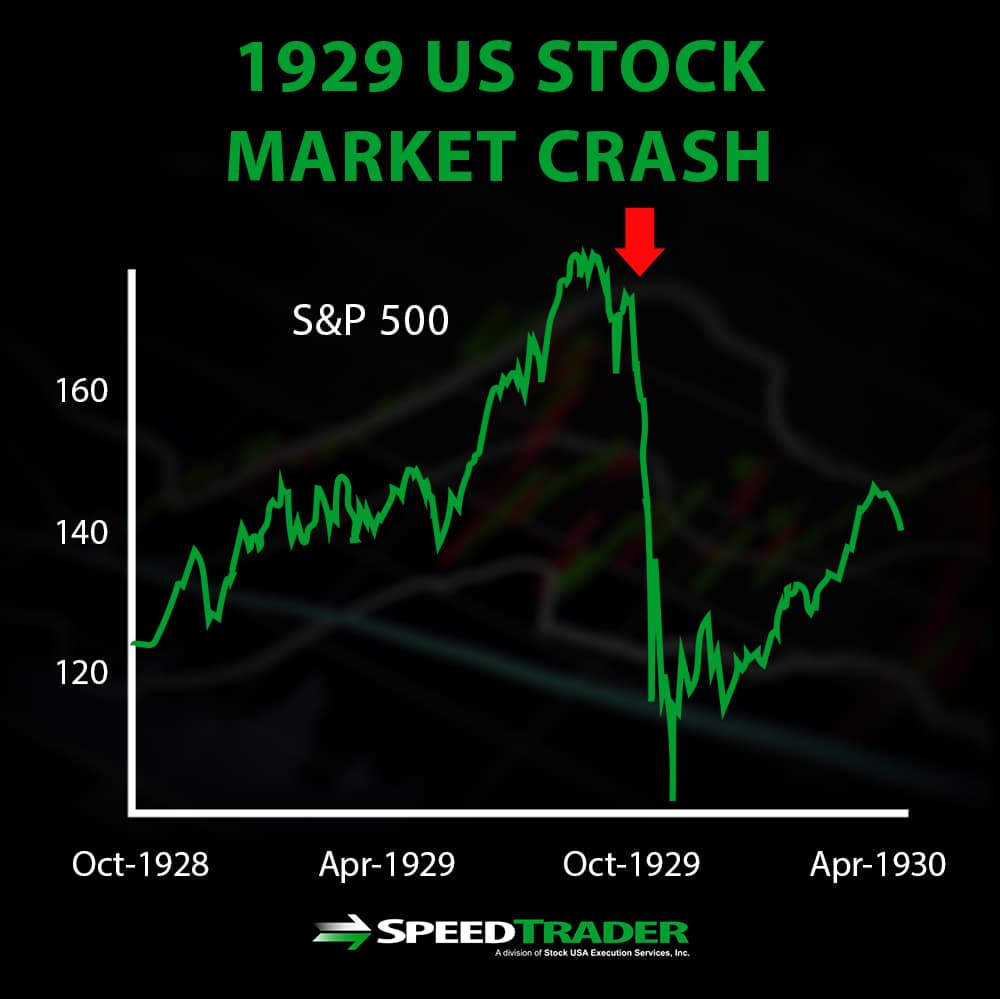 On Monday, October 19, 1987 – now known as Black Monday – the Dow Jones Industrial Average lost nearly 22% of its value. The crash came shortly after the introduction of computer-based trading, which likely amplified the effects of the crash as automatically triggering stop-loss orders piled onto the market as it fell.

The crash was a surprise to traders, but there were some warning signs ahead of time. In the US, economic growth was slowing down as future earnings forecasts were cut and inflation began to increase. At the same time, price-to-earnings ratios continued to increase and the advent of portfolio insurance encouraged traders to take bigger risks during the bullish market.

The crash lasted only a single day since computerized stop-loss orders had largely been executed by the end of the trading day as the market fell. The crash did not lead to a true bear market, although it did mark the end of years of highly bullish market activity. Following the crash, exchanges put several procedures into place to freeze trading in the event of another crash driven by computerized orders. 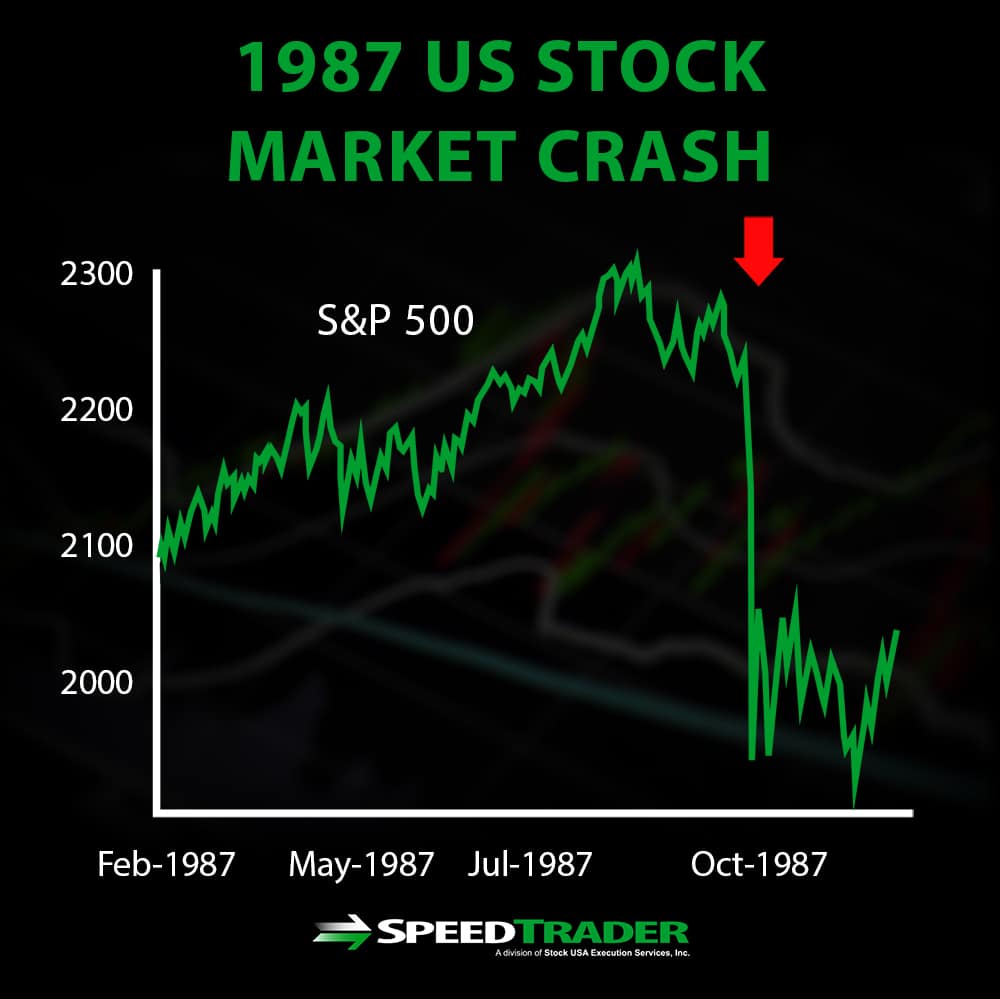 The dot-com bubble burst began on March 11, 2000, and lasted all the way until October 9, 2002. Unlike the other historical crashes, this crash took place over a much longer period, with several days in which the Nasdaq index lost more than 10% in value. By the end of the downturn, the Nasdaq was down 78% from its peak in 2000 and the stock market had lost $5 trillion in market capitalization.

The rise of the Internet happened extremely quickly after it was introduced for public and commercial use. By 1999, there were over 400 technology-related IPOs, and many of those doubled in value on their first days of trading as investors speculated aggressively on the potential of the Internet. Numerous technology-related companies were making 1,000% or greater annual gains in the late 1990s, and the tech boom had encouraged large swaths of the public to invest directly in technology stocks.

Worsening the problem, the valuation of many of these companies was based on ideas rather than actual working business models. The dot-com bubble was marked by venture capitalists giving huge sums of capital to companies that had big ideas, even if these companies had not yet proven that their business models could be profitable or that they could scale appropriately.

Following the crash, only about half of dot-com companies that had gone public still survived. Investor confidence was slow to return, especially given the exposure of numerous financing scandals during the downturn. Ultimately, remaining tech companies were able to consolidate and grow by dominating their respective fields, like Amazon, eBay, and Google. 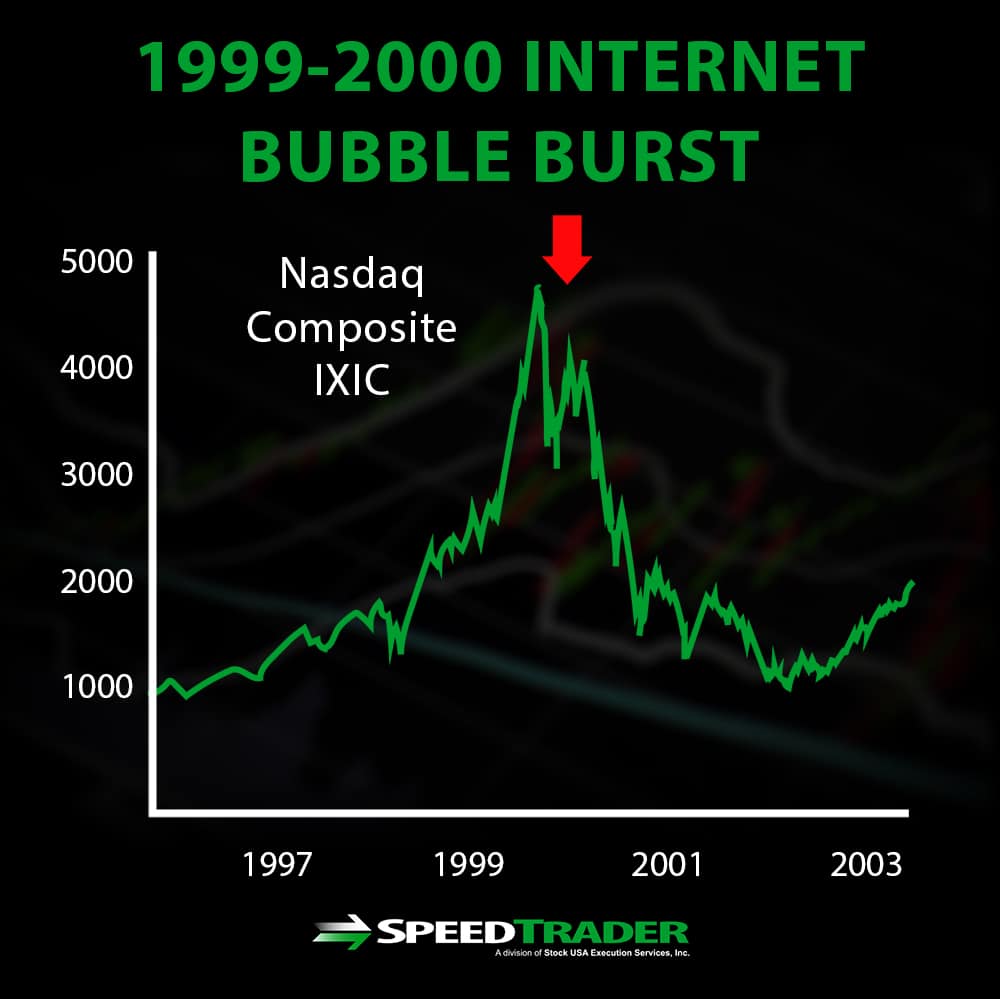 The 2008 recession occurred over the course of 2007-2009, but the Dow Jones Industrial Average experienced its single-largest point loss (at the time) on September 29, 2008. The index lost 778 points, or about 8% of its value. Several days later, the index lost an additional 8%.

The massive losses came in response to the US Congress failing to pass a bank bailout bill, but the economic devastation was more widespread. Credit had largely been frozen by this time, as even banks were unwilling to lend to each other. The Dow continued to fall another 13% through October 2008 as GDP fell 0.3%, indicating the start of a recession. Ultimately, the Dow fell by more than 50% between October 2007 and March 2009.

The recession was caused in large part by banks issuing subprime mortgages, made worse by the fact that a huge number of people took advantage of these low-interest mortgages. Ultimately, even insurance companies like AIG, which had backed these mortgages, were caught up in the financial crisis as loan repayments stopped and banks began freezing credit.

The 2008 recession was the single worst economic crisis in the US since the Great Depression and its effects were global. The US was able to prevent a complete economic free-fall by bailing out banks, insurance companies, and large industries like the auto sector. Fears around the stock market continued until 2013, when investor confidence finally buoyed the Dow to record gains. 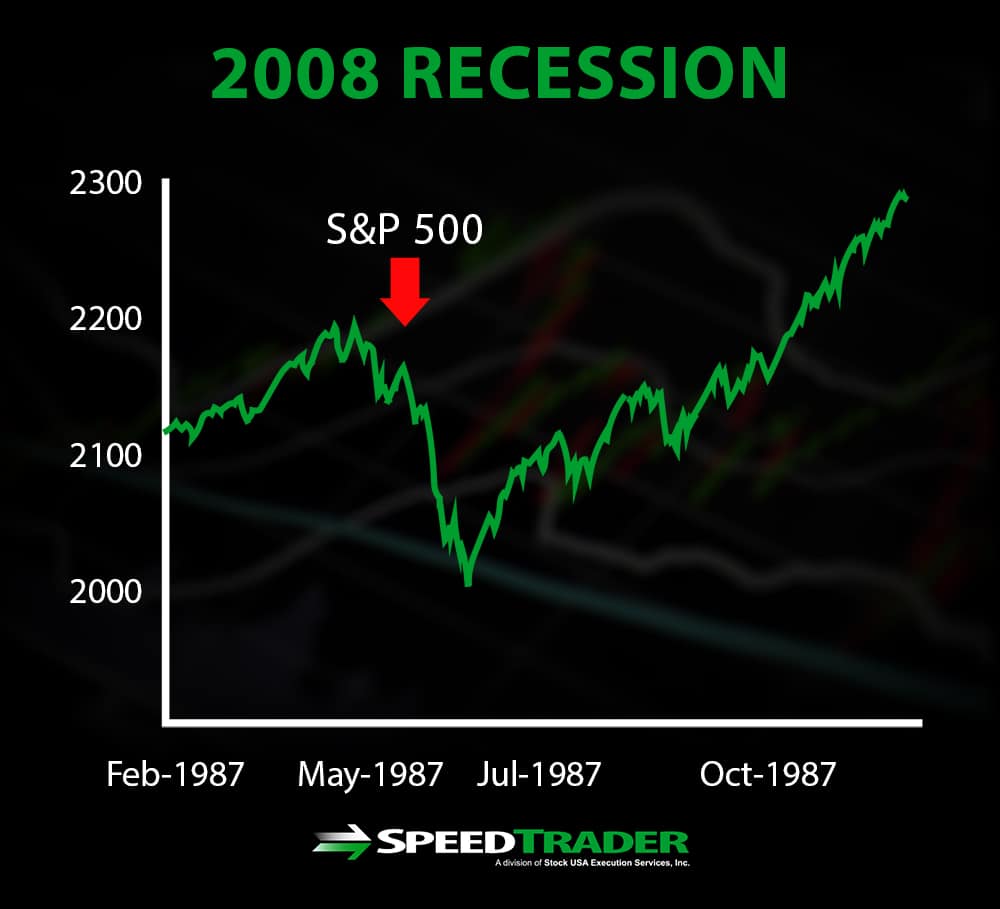 Stock market crashes are a part of the stock market cycle. While each of the historical crashes has different causes and effects, over-speculation in risky assets is a common thread. It is important for traders to be aware of broader market trends and warnings about large-scale risks in the stock market in order to be prepared for future crashes.