Back in the 1930’s, accountant Ralph Nelson Elliot discovered something about the stock market – it responds in a repeating pattern to large-scale optimism and pessimism by investors. Elliot spent the following decade building out his theory, describing how the principles of crowd behavior can be used to predict trends in the stock market. Although Elliot’s underlying theory remains unproven, his ideas are still popular today. Most notably, the trader Robert Pretcher is an outspoken proponent of Elliot’s theory about the repetitive sociology-driven trends in the market.

Crowd behavior occurs when the behavior of a large group begins to work somewhat independently from the behavior of individuals within the group as the sense of individual responsibility is lost and subconscious behaviors take hold. In Elliot’s theory, crowd behavior takes the form of optimistic and pessimistic trading, which drives the markets in waves of bullish and bearish trends. According to Elliot’s wave theory, understanding this repetitive crowd behavior enables predicting trends in the stock market. 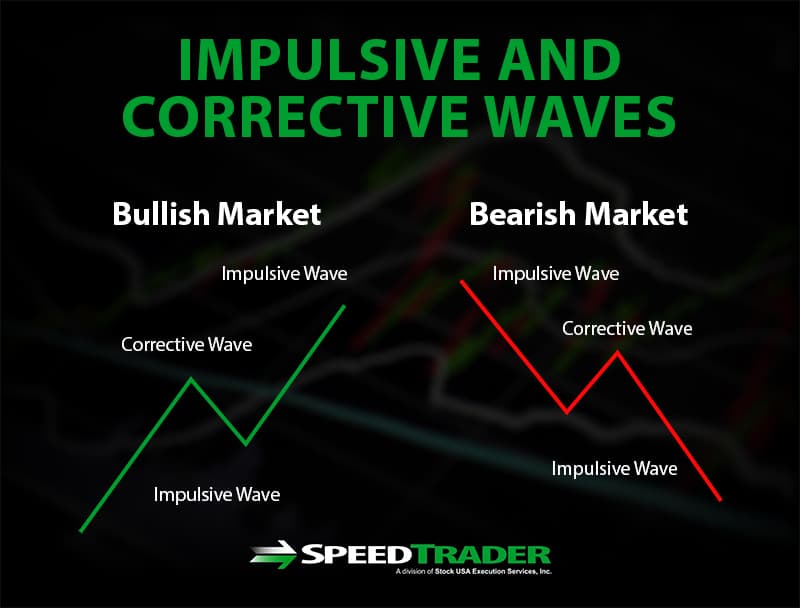 Altogether, an Elliot wave consists of eight parts: five in the impulsive phase (three actions and two reactions) and three in the corrective phase (two actions and one reaction). 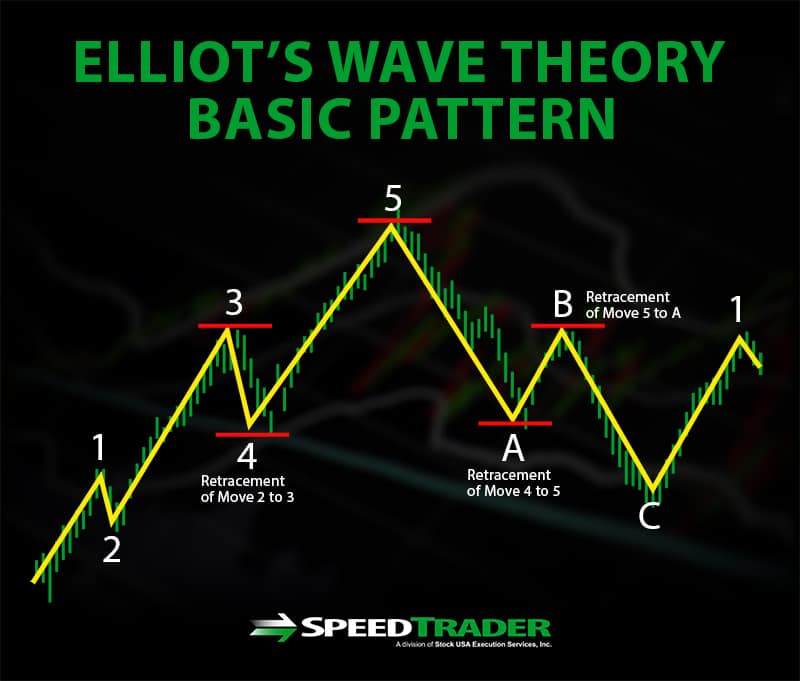 These waves, when completed each become two parts (one action and one reaction) of a larger wave that is taking place over a longer timescale. Waves thus can be classified according to the timescale over which they occur, although it is impossible to truly know which class of wave any particular market movement is a part of. The different wave classes and their approximate timelines are:

Corrective waves are typically more difficult to identify than impulsive waves, in part because the movement against the predominant market trend causes some pushback against the corrective behavior. As a result, several types of corrective wave patterns have been described.

The zigzag pattern is what is typically expected of a correction wave. It involves the price moving against the impulsive trend, then a reaction that retraces some – but not all – of the correction, and then another corrective movement that pushes beyond the first correction action.

In some cases, most often when the bottom of the correction remains above a stable price level, a zigzag can develop into a double or even a triple zigzag. When this occurs, the corrective zigzag will be followed by a three-part wave in the direction of the original impulsive movement before another corrective zigzag occurs and pushes beyond the first correction.

Triangles occur when market forces are relatively balanced, resulting in sideways price movement and typically declining volume and volatility in a stock. The triangle appears as a series of five three-part waves, with the net direction of each wave opposing the preceding three-part movement.

Triangles can also be symmetrical, otherwise known as contracting. In this case, the successive highs of the high waves are decreasing at the same time that the successive lows of the low waves are increasing. The result is that two trendlines – one connecting the highs and the other connecting the lows – would appear to converge. The opposite is true in a reverse symmetrical or expanding triangle – successive highs get higher while successive lows get lower, and the same trendlines would appear to move apart from one another.

Triangles typically occur one movement prior to a return to the wave of one degree larger. That is, they may be the fourth part of a five-part impulse, the second part of a three-part correction, or the last action in a double or triple three (see below). 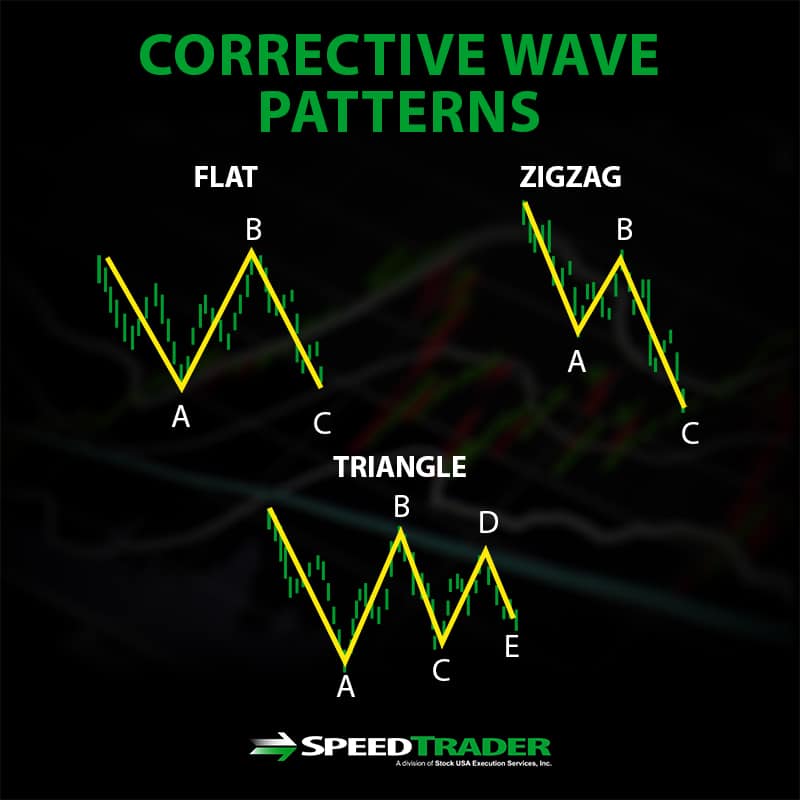 Because corrective movements typically occur as three-part waves, Elliot called consecutive three-part correction waves double or triple threes. In this context, triangles – which are really five three-part waves – are considered a single “three” along with zigzags and flats. Double and triple threes typically result in net sideways price action, in part because there is never more than one zigzag or triangle (the latter is always the last portion of a double or triple three). That means that in a triple, at least one of the threes is a flat. 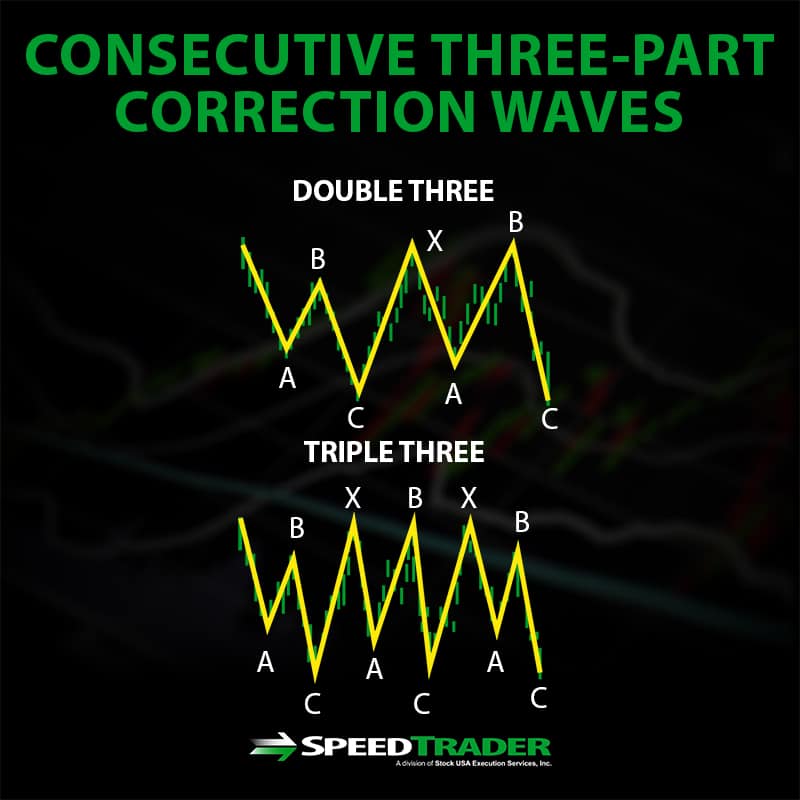 Although fractals – self-repeating structures that occur throughout nature and mathematics – were not known at the time Elliot described market waves, his waves fit the characteristics of fractals. Waves are self-repeating over multiple timescales, such that each wave is part of a larger wave, which is part of a larger wave, and so on. Although this is useful in that repeating waves are theoretically predictable, the difficulty comes in determining where you are within a wave and on what timescale that wave is occurring.

Elliot waves describe bullish or bearish movements that are then counteracted by a bearish or bullish movement, respectively. Within the first, impulsive movement, there are three actions – movements in the same direction as the overall bullish or bearish trend – separated by two reactions – movements that oppose the overall trend. After these five movements, a correction movement occurs over three actions – two in the opposite direction of the impulsive movement separated by a partial retracement. These full eight-part waves occur repeatedly within the market, on timescales ranging from minutes to centuries, such that each wave is part of a larger wave.