Small Cap Stock Trading: What You Need to Know

What is a Small Cap Stock?

The “cap” in small and large cap stocks refers to the relative market capitalizations of the companies underlying different stocks. Market capitalization is calculated as the number of outstanding shares of a company’s stocks multiplied by the value of those stocks – not counting outstanding bonds and assets. Market capitalization can be used as an estimate of a company’s market value. Companies with market caps ranging from $300 million to $2 billion are considered small cap stocks, while companies with market caps greater than $200 billion are considered mega cap or blue chip stocks.

Small cap and large cap stocks differ in their relative growth, stability, and price. Large cap stocks tend to be from companies that are well-established in their respective industries and, as a result, tend to exhibit lower volatility. Large cap stocks also tend to be relatively pricey because of their well-established nature and correspondingly high demand. Small cap stocks, on the other hand, have much greater potential for growth, but can also exhibit more volatility in stock price as companies go through growth spurts and periods of consolidation. Small cap stocks are often less expensive per share, although they may have high price-to-earnings ratios. However, these are not hard and fast rules as even large cap stocks can experience volatility, growth, and contraction. 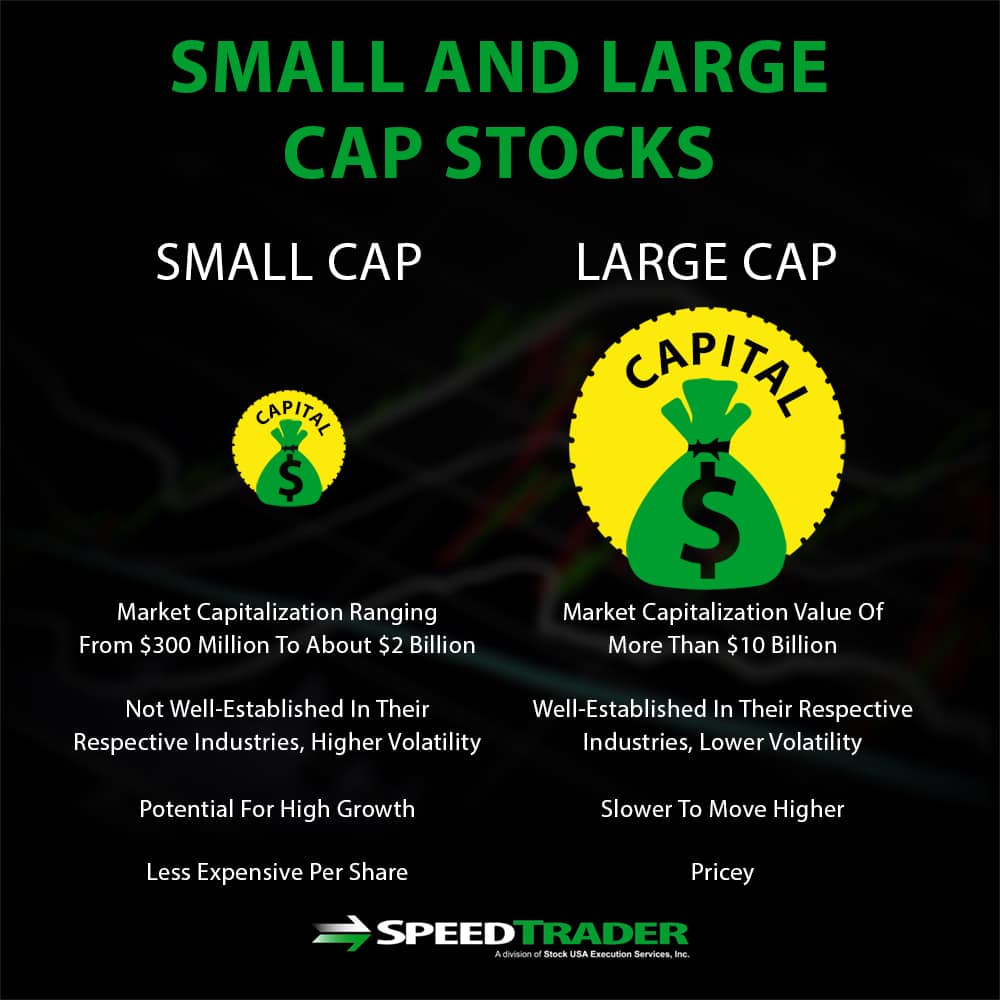 Although small cap stocks are small relative to large cap stocks, they are still orders of magnitude larger than penny stocks. Penny stocks, also known as micro cap stocks, belong to companies with market caps less than $300 million and often less than $100 million. 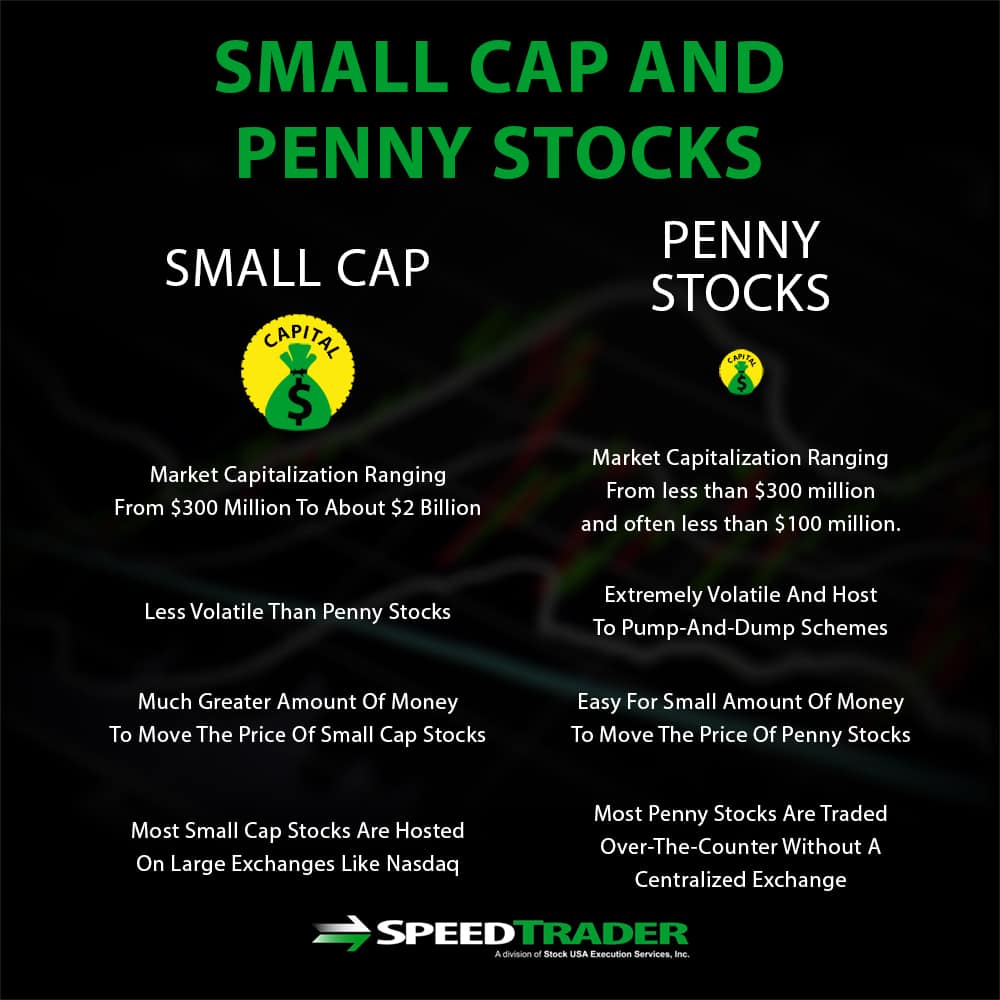 How to Trade Small Cap Stocks

One of the hallmarks of trading small cap stocks is their volatility. Compared to established blue chip companies, small companies typically have much higher growth and burn rates since they are starting with smaller sales bases. In addition, it takes less money invested by or pulled out from a group of investors or an institutional investor to move the price of a small cap stock significantly. It is not unheard of for small cap stocks to go on runs of more than 100% in either the positive or negative directions as a result of these factors.

With that volatility comes additional risk to trading small cap stocks compared to large cap stocks. To mitigate some of that risk, consider playing both sides of a trade. In that case, it is possible to place both long and short positions, using one to hedge against the other. For example, a short-term negative run may eventually be overshadowed by the long-term growth of the company, so it would make sense to place trades for both timescales.

Another strategy for trading small cap stocks is to identify points of momentum. Spikes in trading volume typically coincide with periods of added liquidity in the case of small cap stocks, which makes it easier to fill trades. In addition, increased volume can be a sign that a run is beginning or continuing.

Finally, an important difference to keep in mind when trading small cap stocks is who else is trading along with you. Whereas blue chip stock prices are largely driven by institutional investors, such as mutual funds, small cap stocks mostly do not have institutional investors involved because their investment would significantly alter the price of the stock. Instead, small retail investors dominate the small cap market and their reactions to news will largely drive share prices. 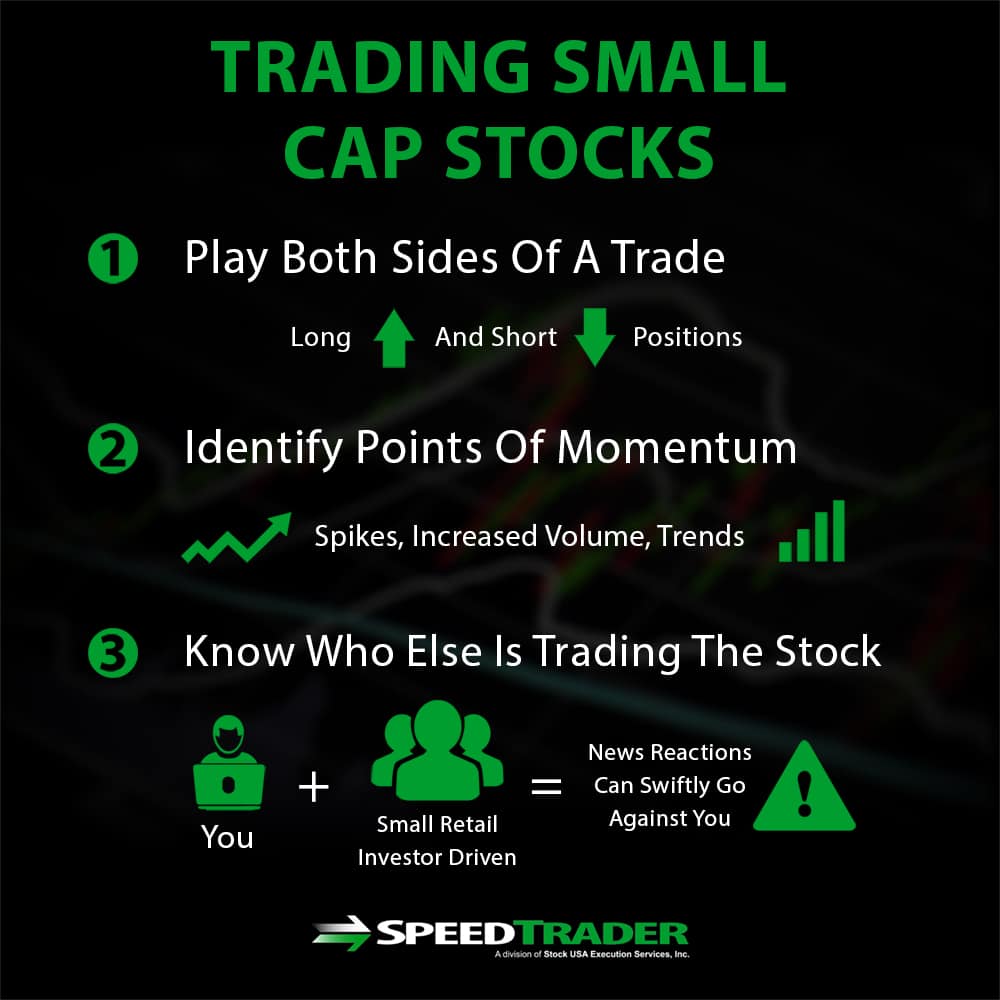 Small cap stocks offered by companies with relatively small market valuations offer a wealth of different trading opportunities from those normally found in well-established stocks. Small cap stocks typically exhibit high volatility and therefore are considered riskier, but there is also the chance to trade without institutional investors driving price movements and to find an “undiscovered” company that will burgeon into the future. To offset some of the risk in trading small cap stocks, consider hedging your bets by playing both sides of a trade and keep an eye out for momentum by following periods of increased trading volume.