Trading Penny Stocks: Everything You Need to Know

What is a Penny Stock?

Penny stocks are a general term used to categorize stocks that are priced from $5 to less than $0.01 per share. They are also referred to as micro-caps, bulletin board and pink sheet stocks and trade on the NASDAQ, OTCBB and Pink Sheets. These stocks can be extremely illiquid and volatile especially pink sheet stocks. The pink sheets are a realm wrought with fraud, pump-and-dump manipulation and shell companies. Stocks priced under $5 but are listed on the NYSE or NASDAQ aren’t considered penny stocks per se since there are stringent requirements to maintain listings on the major exchanges. However, when stocks get de-listed, they often move over to the over-the-counter (OTC) exchanges with a new symbol or an additional suffix.

What is the Appeal of Trading Penny Stocks?

There is a lot of controversy surrounding penny stocks. Some traders write these stocks off as illiquid scams while others promote them as a great way to grow small accounts. While both sides have their points, it’s important to understand why some traders are attracted to penny stocks.

Penny stocks are often considered a gamble but have the potential to generate double to five-figure percentage gains in short periods of time. The prospect of transforming just a few thousand dollars in risk capital into a six-figure fortune easily sucks in new penny stock players daily. Everyone wants to get in on the ground floor for “the next” Apple or Amazon.

Theoretically, penny stocks are generally companies that are in the start-up or recovery phase with limited financials and/or operating history. Fundamentally, these stocks are the least desirable to own. However, the essence of the markets revolves around risk versus reward. The caveat dictates that the higher the risk, the greater the potential reward. Investors sift through these carcasses in the hopes of finding the proverbial “needle in the haystack” that has been mis-priced or gone under the radar by the markets.

Since penny stocks are the cheapest stocks you can buy, it allows for small accounts to take large positions for relatively small amounts of capital. For example, $5,000 in capital can only buy 50 shares of a $100 stock compared to owning 2,500 shares of a $2 stock. The $100 stock would need to move up $5 to generate a $250 profit compared to just a $0.10 move on the $2 stock. It may takes days for the $100 stock to move 5 points, whereas the penny stock can make a $0.10 move in a matter of minutes. Although both represent a 5% move in the underlying stock, the upside move is gained quicker on the $2 stock in most cases. This is a double-edged knife, since the penny stock can drop just as much in a matter of minutes as well. 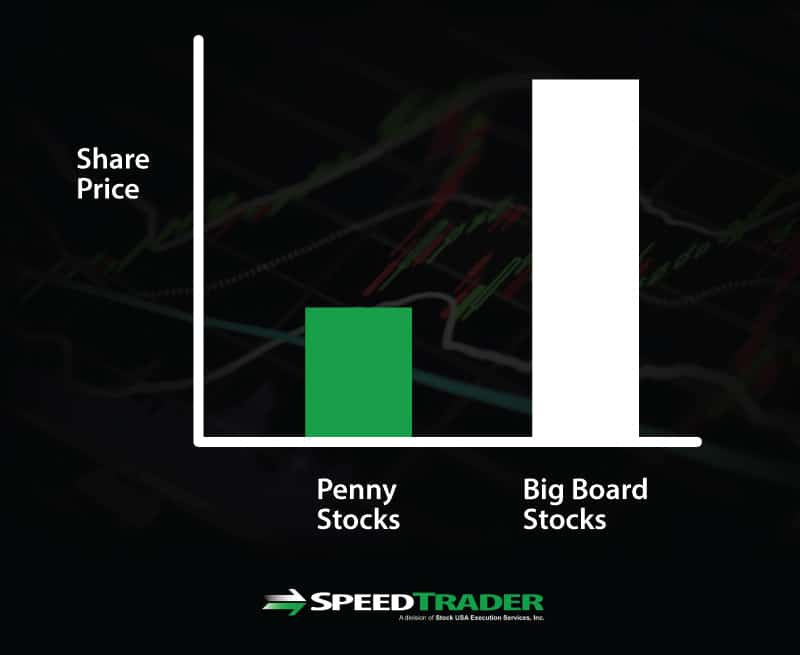 When a penny stock generates momentum, it can often make 1,000% gains in a matter of days, while a $100 may takes years. However, when these stocks surge that fast, they can collapse even faster leaving a trail of bag holders in the process. This is where newbies often get stung but believing the hype and holding on too long. Often times, the real reason for the run up is due to a pump-and-dump campaign where the companies hire third-party promoters to distribute direct mailing, spam e-mails and social media to generate buzz and trigger a tidal wave of buying for a short-term parabolic spike.

Penny stocks often serve as a gatekeeper for many newbies to enter the world of stock trading. Many just fizzle out but some will eventually graduate to trading more legitimate, liquid and widely traded stocks listed on the major exchanges.

How Penny Stocks Differ from Big Board Stocks

Big board stocks listed on the NYSE and NASDAQ exchanges are required to meet and maintain critical listing requirements and regulations. Big board stocks are required to file quarterly earnings reports with the Securities and Exchange Commission to ensure credibility and disclosure with the public. While penny stocks are also required to file quarterly reports, they tend to be inconsistent following through for various reasons including lack of funds, delays and fraud.

It’s important not to focus solely on the upside potential of trading penny stocks. The downside is literally a price drop to zero as most penny stocks end up worthless. While a five-figure percentage bounce off the lows is great for the nimble traders that got in low, most of the investors are bag holders that paid much higher prices. It’s important to assume any penny stock you trade can go to zero sooner rather than later. 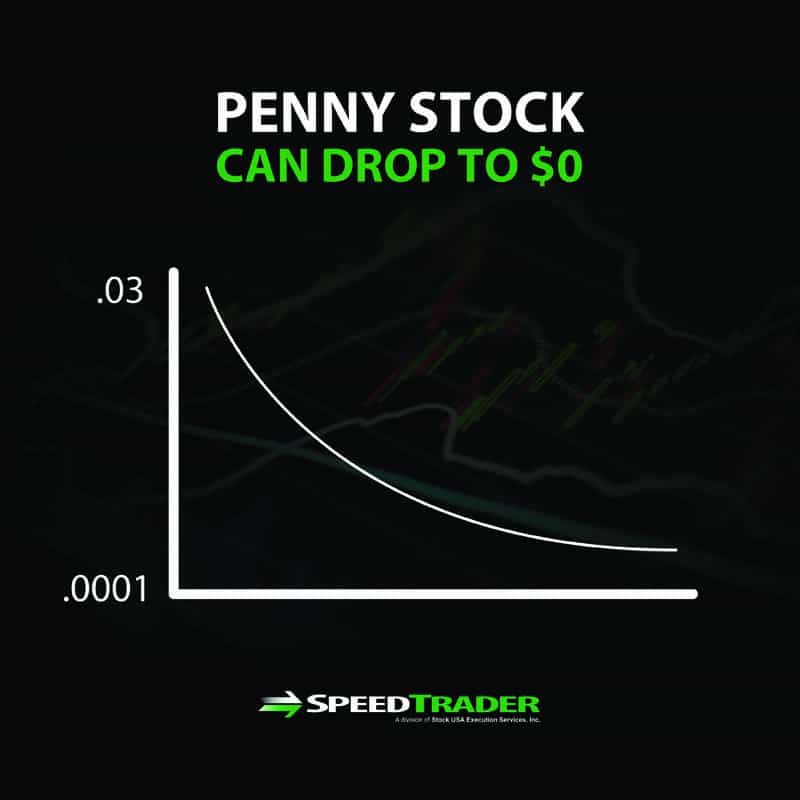 Liquidity is the biggest risk factor with penny stocks. Since volume is usually light, the spreads can also be rather wide. This implies a lack of liquidity. While this can cause penny stocks to spike hard and fast on volume, it also makes exiting positions very difficult when the volume contracts back to normal. Liquidity overrides price. The lack of liquidity results in extra slippage due to the inconsistent and extra wide spreads. For example, if you took 5,000 shares of a penny stock at $0.50, it may actually cause the stock to bounce to $0.60, which gives you a $500 paper profit. However, the spread could be as wide as $0.05 indicating a bid and ask of $0.60 x $0.65. When you try to sell your 5,000 shares for a profit, the bid may quickly drop to $0.40 per share turning your $500 profit into a $500 loss. Always gauge the spreads to make sure you aren’t chasing too much on the entries. 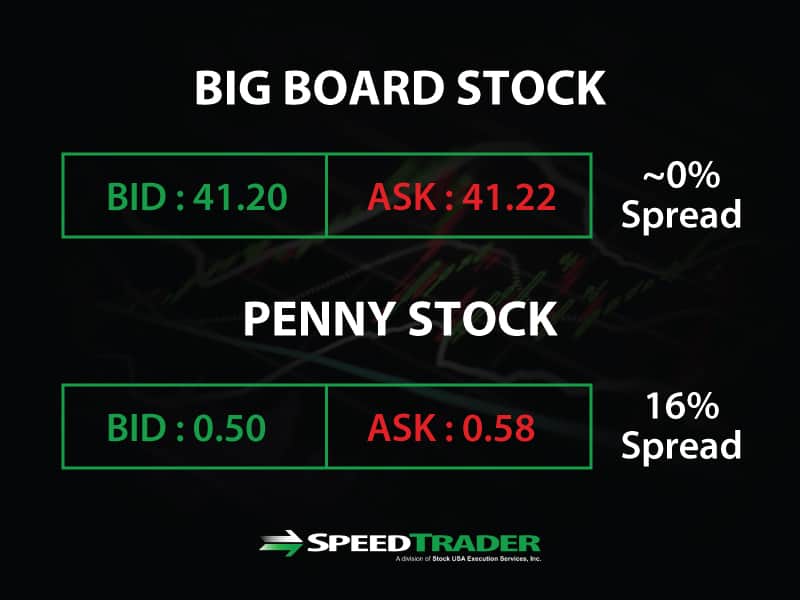 Most penny stock companies have limited company fundamentals aside from intermittent press releases. If the penny stock was a former listed stock, then there will be more historical information. However, those companies got demoted to penny stock status for a reason and may be more likely to go bankrupt. Many penny stocks, especially pink sheet stocks operate as corporate shells that companies will back into rather than IPO.

Penny stocks are notorious for third-party promotions dubbed “company awareness” campaigns. These companies distribute legitimate looking analyst-style reports online and through direct mailings to generate interest in the stock and suck in new investors. This can trigger a heavy volume price spike, which promoters and insiders use to unload their shares. These pump and dump campaigns eventually fizzle out as volume wanes before collapsing in price. As liquidity dries up, the price falls quicker, trapping more traders and triggering more panic leading to a collapse. This is the basic music chair like sequence of a pump and dump. 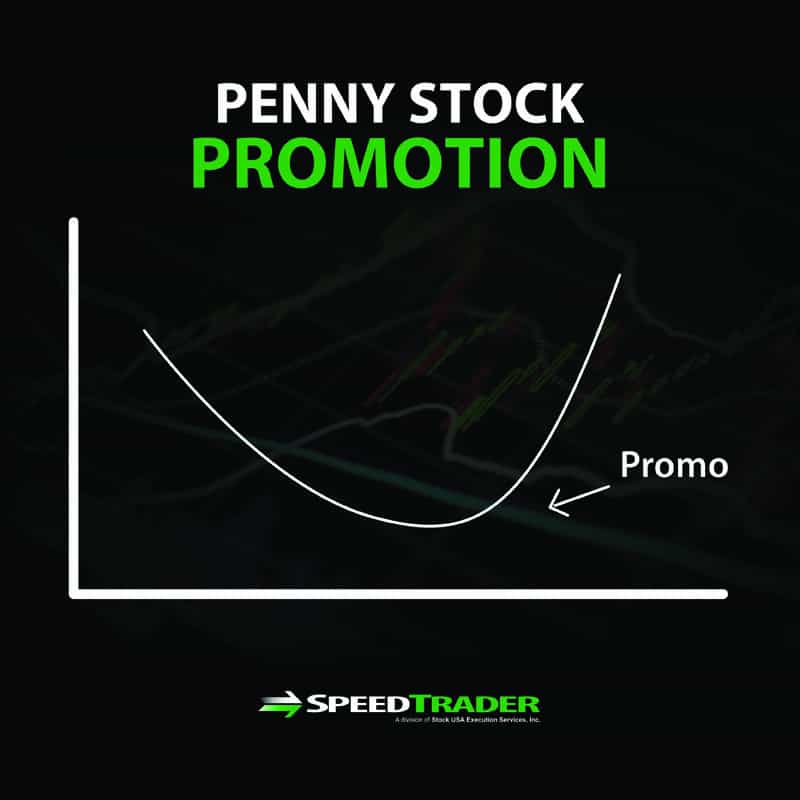 Assume most of penny stocks are junk. Consider them to be the proverbial “hot potatoes” as most will eventually go bankrupt. Focus solely on price action and exits. Don’t hesitate to take stop-losses. The last thing you want to be is a bag holder. Only allocate a very small portion to any longer term holdings that may have viable fundamentals.

Assume all posts on social media and message boards are meant simply to suck in bag holders. Gauge the “story” from a third person perspective and focus on how others will react, rather than you reaction.

Stick to high volume penny stocks that trade at least 500,000 shares a day or $1 million in aggregate value daily for stocks trading under $1. Remember that most of these stocks have no institutional ownership, which implies a lack of stability. It’s musical chairs among mom and pop retail investors and day traders. Only play where the action is and don’t hesitate to walk away in cash. Stay on top of hot themes and always monitor when they have peaked out. Timing is everything. Always try to exit early into the move to ensure you have liquidity.

Avoid being a dreaded bag holder.

Have a solid technical analysis-based trading methodology. These are still stocks with price action. Being able to analyze and react to the price action is key. Be aware of the trend, support and resistance levels at all times.

Prepare ahead of time before making the trade how much risk you are willing to take. Never go “all-in” on a single position. Try to maintain a minimal 2 to 1 risk/reward ratio, try to early $2 for every $1 of risk capital. Expect to stop out on most trades, but the winners can more than make up for them. Allocation a set dollar amount or a % of capital amount to each idea. Most importantly, always keep your stop-losses. 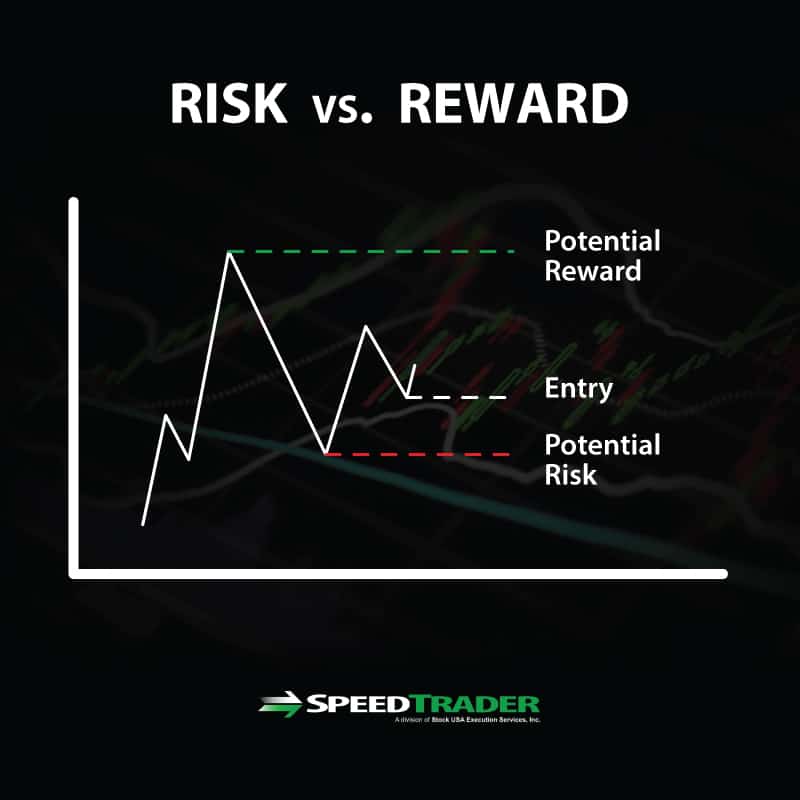