Being a successful trader means more than making a few good trades here and there – it requires having a fundamentally strong idea of how to manage risk. A series of significant losses can quickly negate the profits from hard-earned gains and turn a brokerage account negative even if it contains an array of winning positions. In addition, keeping losses small can have the same net effect on profits as increasing gains over the long term. In this article, we’ll cover some of the advanced trading strategies that can work to minimize your risk of suffering significant trading losses.

The first strategy to minimize risk is to add money to stocks that have performed well and have room to continue bullish trends, while keeping additional money away from stocks that have languished. This strategy may seem obvious at first, but sticking to it can be difficult in the moment. After all, no one wants to buy high and risk the reversal of a bullish run erasing unrealized gains. But, doubling down on positions that are working and waiting or cutting losses on those that aren’t is a strong move for limiting risk and potentially increasing gains. 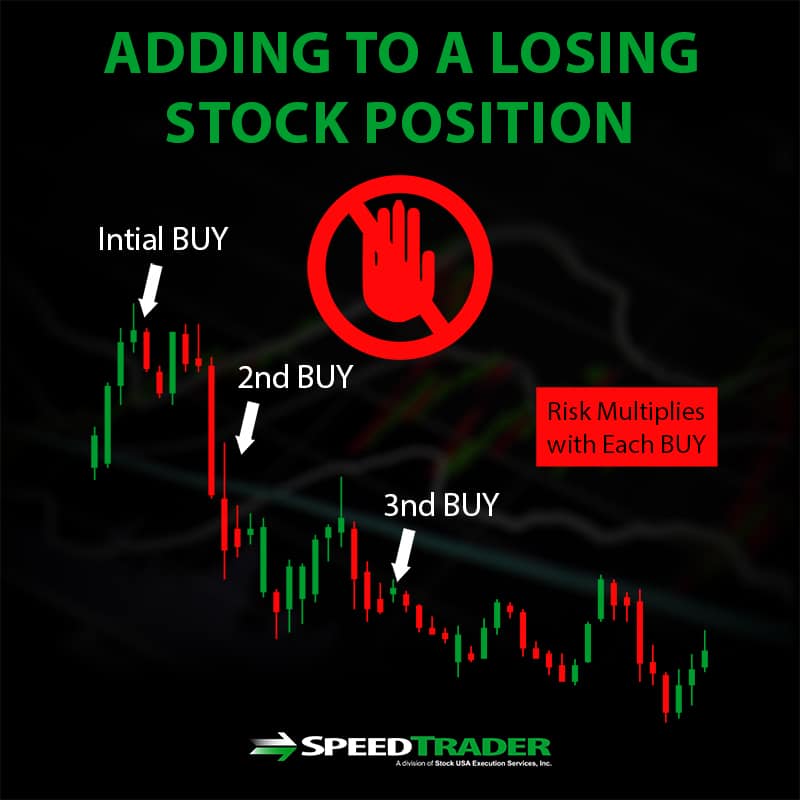 Having unrealized gains on a position is the crux of this risk management strategy. Although losing these gains can be heartbreaking, they effectively insure a secondary position against losses on your principle investment. For example, say you open a position at $50 and the stock then rises to $100. If you open a secondary position equivalent to the first at $100, you have a lot of padding due to your existing profits. 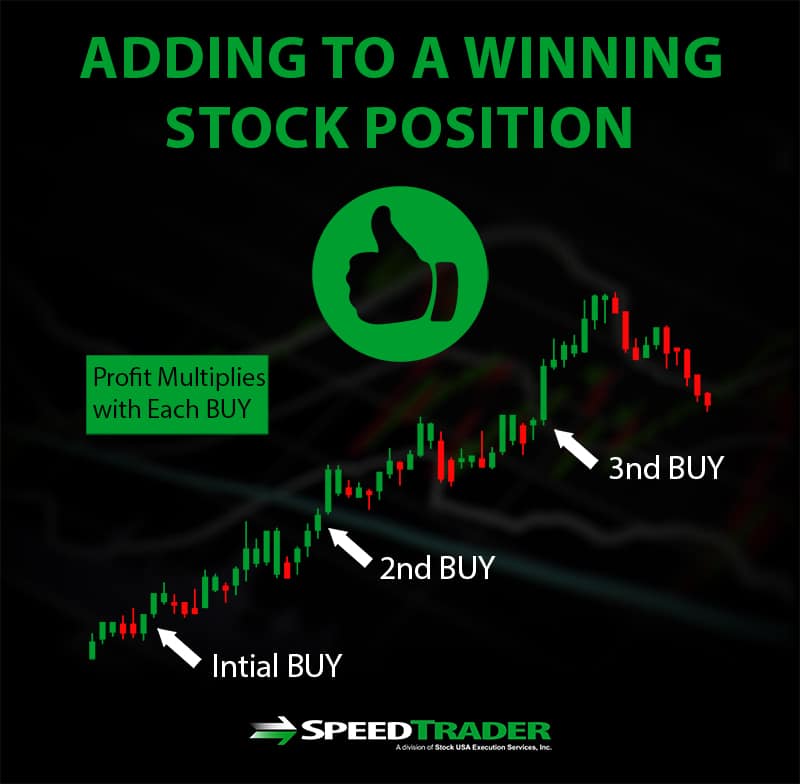 Scale In and Out of Trades

Scaling in and out of trades is an excellent strategy for minimizing risk when you are entering a position and maximizing profits when you are exiting a position. Rather than buying or selling all shares of a stock at once, scaling in and out entails buying and selling, respectively, over a window of time. This is particularly important when market volatility is high and it may be difficult to gauge whether a stock price has hit its minimum or maximum value. Scaling in and out of trades can be used to match your position sizes with your conviction. If you are uncertain of a breakout, you can start with a much smaller position and add more shares as the breakout is confirmed.

As an example of scaling in, consider buying 1000 shares of a stock. But rather than buying that 1000 shares all at once at the target price, you purchase them in increments of 250. This way, as the stock price moves up and down, the average cost basis for the full 1000 shares more closely tracks any trend in the stock’s price. This can significantly reduce initial losses if the stock’s price drops after the first trade compared to buying all 100 shares at once. Meanwhile, if the stock price moves strongly upward, the gains will only have been marginally reduced. 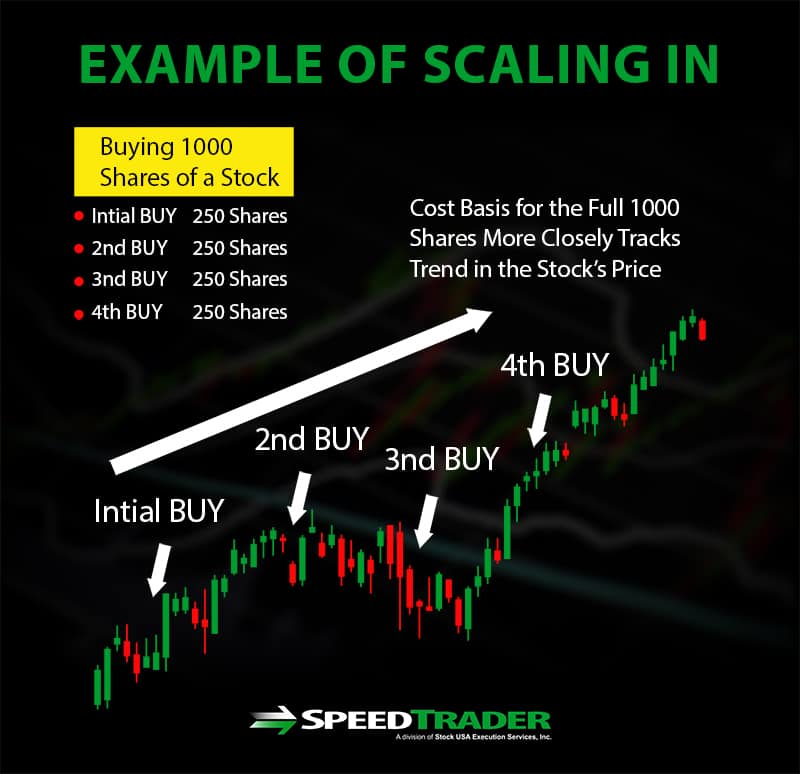 Scaling out applies the same principle when exiting a position in order to maximize profits. Rather than selling all at once, selling in increments ensures that the average sale price captures, at least in part, any continued rise in a stock’s price while protecting against declines. 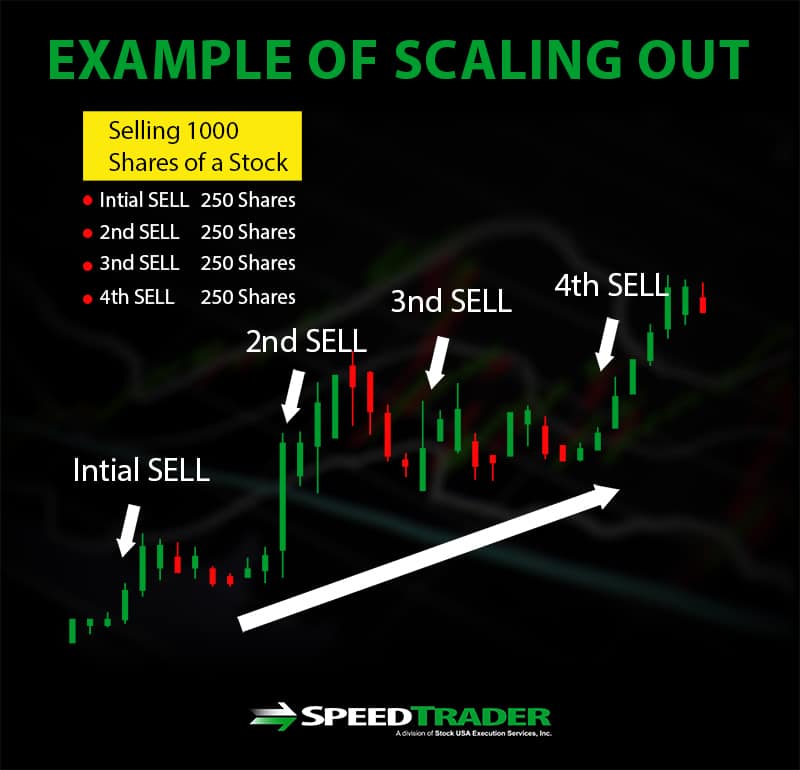 In both cases, determining increments and specific prices for buying and selling should rely on technical analysis. Overall, your scaling positions – that is, how you much you buy and sell at each increment – should match your conviction that a stock’s price will rise or fall from the price of that incremental buy or sell.

Earnings reports can produce unpredictable volatility in a stock’s price and it is almost impossible to accurately predict whether a stock’s price will rise, fall, or remain neutral following earnings. Earnings reports are doubly dangerous because they occur outside of market hours, when it is difficult to react to price changes in real-time. Exiting positions before an earnings reports is a smart way to minimize risk from the large, unpredictable changes in a stock’s price they often cause. Moreover, the same strategy applies whenever outside events may bring unwanted volatility and risk to a stock. Although this may mean missing out on big gains, keep in mind the net damage that a double-digit loss can do to profits from other positions.

Calculate Your Risk Before You Place a Trade

Although most trades are made with an optimistic outlook, it’s important to know exactly how much you stand to lose for every trade. For example, if you by 100 shares of a stock at $1000 and immediately set a stop loss at $90, you know you stand to lose up to $1000 on the trade if things don’t go as planned. Making these calculations for every trade can help you to understand the risks you are taking and trade only what you are willing to lose. 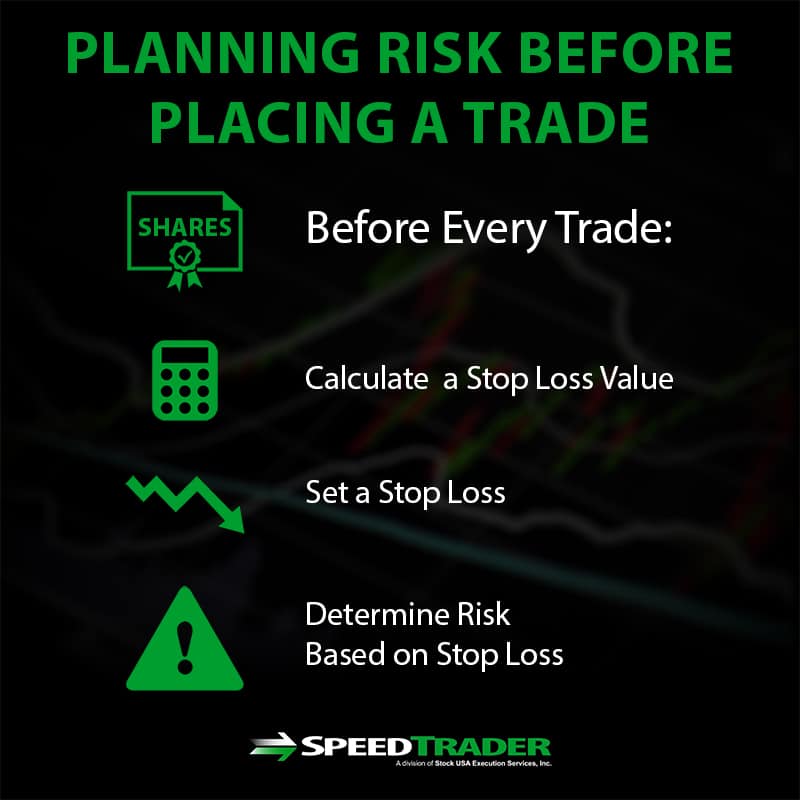 Stick to the Original Game Plan

Before entering a trade, have a strict plan for when to cut your losses – and force yourself to stick to that plan. Typically, changing your plan after you have established a position is a sign of rationalizing a trade that is not working out. The result is more often further losses than the hoped-for reversal to gains. By the same token, have a plan in mind for what do if a stock’s price rises. That may mean a hard exit price or a target price to re-evaluate whether holding or doubling down is a risk worth taking.

An easy way to help yourself stick to your plan is to write it down before you make a trade. That way, it is easy to reference back to your target prices and predetermined reactions rather than second-guess and rationalize as a stock’s situation changes.

It’s Better to be Late than Early

If you see a stock dropping or rising precipitously, it can be easy to get sucked into placing positions around the bottom or top of the move betting that it will reverse. But it is also easy to miss, often badly, and end up in a position that is immediately losing. Avoid the fear of missing out on the absolute best position, and instead focus on placing lower risk positions that are more likely to produce rewards.

This means trading not during the steep rise or fall itself, but rather after the stock is more stable. The odds of opening a profitable position during this movement are significantly higher since you will be moving with the trend rather than betting against it. 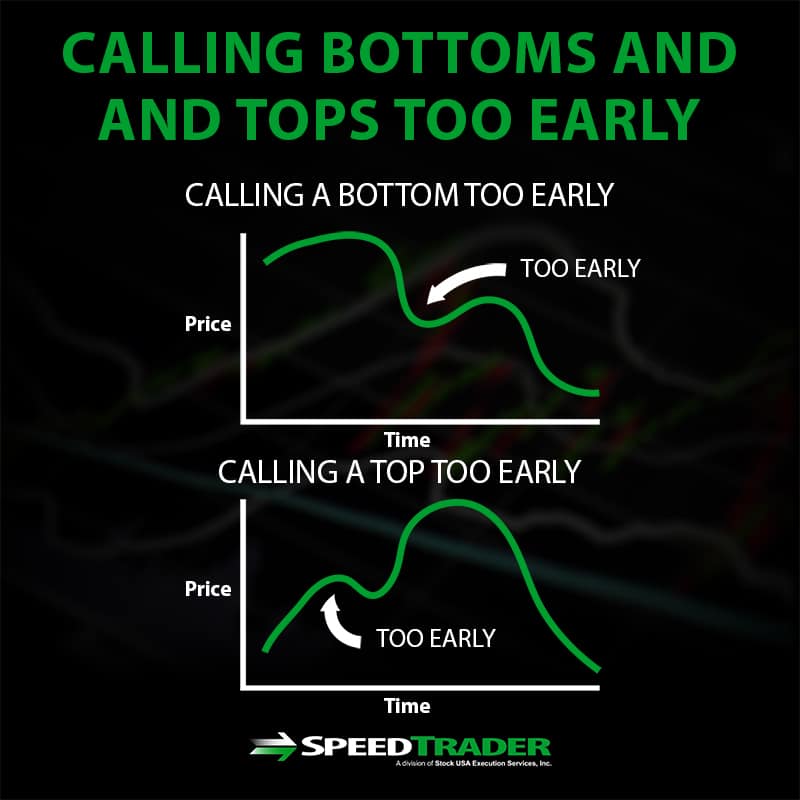 Have a Risk Management Failsafe

One of the hardest parts of cutting losses is that it is in essence an acknowledgement that a bad position was opened. But knowing when to walk away and encoding that in an inflexible plan can be key to keep already severe losses from becoming even worse.

This “failsafe” plan should be a hard stop on how much you are willing to lose on a single trade before pulling the plug. An example would be that you immediately exit any position once it amasses $1,000 in unrealized losses. Although the $1,000 loss may be hard to swallow, it is much better than losing even more on that single position. One way to force yourself to adhere to this plan is to encode it in a stop loss immediately after opening a position.

The same failsafe strategy can apply to trading over a single day or single week. For example, on any day, once you have lost $1,000, you immediately exit all positions and stop trading until the next day.

Managing risk can be one of the hardest aspects of trading to master, not because it is inherently difficult but because it can be difficult to accept a loss. But managing risk is an essential component to protecting profits over the long term. Applying strict strategies for how and when to open and close positions and having a plan in place when you trade is critical to keeping losses manageable and succeeding as a trader.