What is a Stock Market Correction?

Everyone celebrates when the market trends consistently upward, but neither bullish nor bearish markets can last forever without a pause. That pause often takes the form of a stock market correction. While corrections may catch many traders off guard and cause a panic, they can also be opportunities for savvy traders to make money. This article will cover the basics of what a stock market correction is and how to respond to them.

What is a Stock Market Correction?

Stock market corrections typically occur in response to many stocks and bonds across the market being overvalued after an extended bull market. Prices closing lower across the market over a period of days to weeks or recent underperformance in stock indices in other markets around the world may indicate that a correction is close. The trigger may be financial or global news or a large investment firm selling stocks, but typically once selling begins panic drives the sell-off to continue.

Of course, stock market corrections are not an anomaly, but rather an integral part of a healthy market. Stock market corrections occur as frequently as multiple times per year to once every couple years and help to keep the market and investors in check. Typically, corrections last weeks to months and the market is able to rebound and recoup losses within several weeks of the end of a correction. In addition, a correction does not necessarily signal that every single stock and bond will fall – while the market as a whole may drop, individual stocks may suffer little or even gain during the correction period. 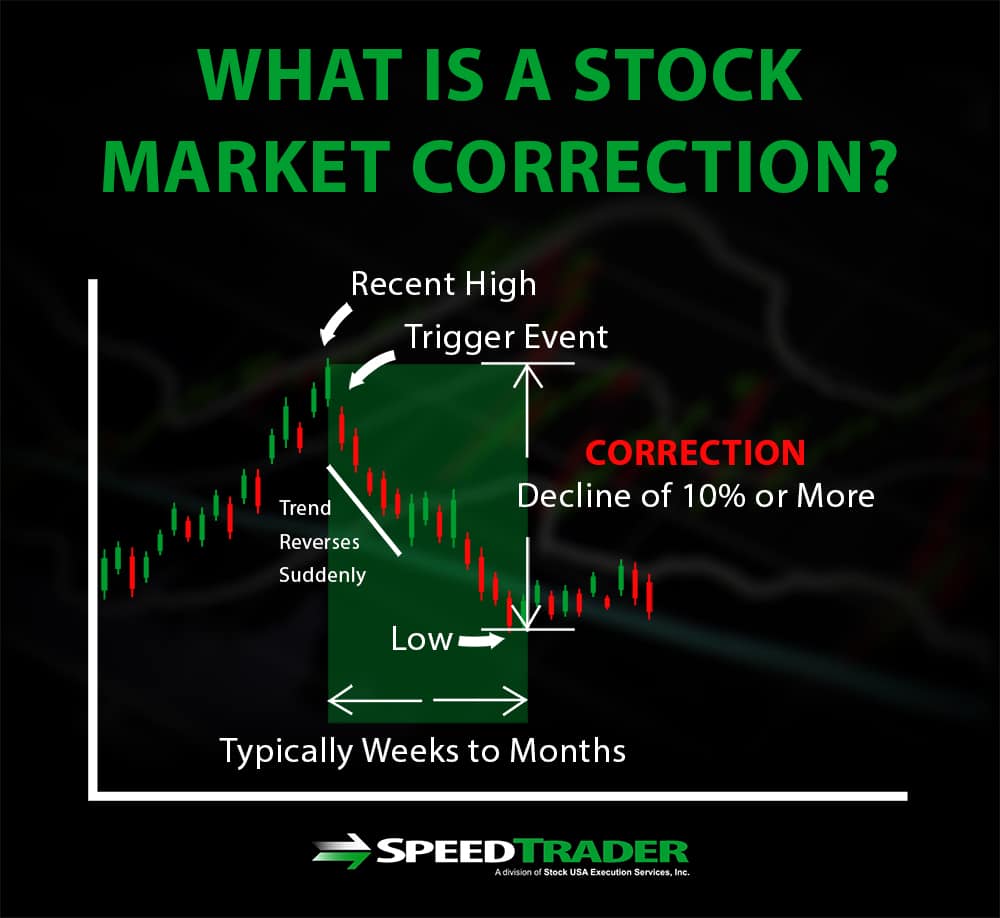 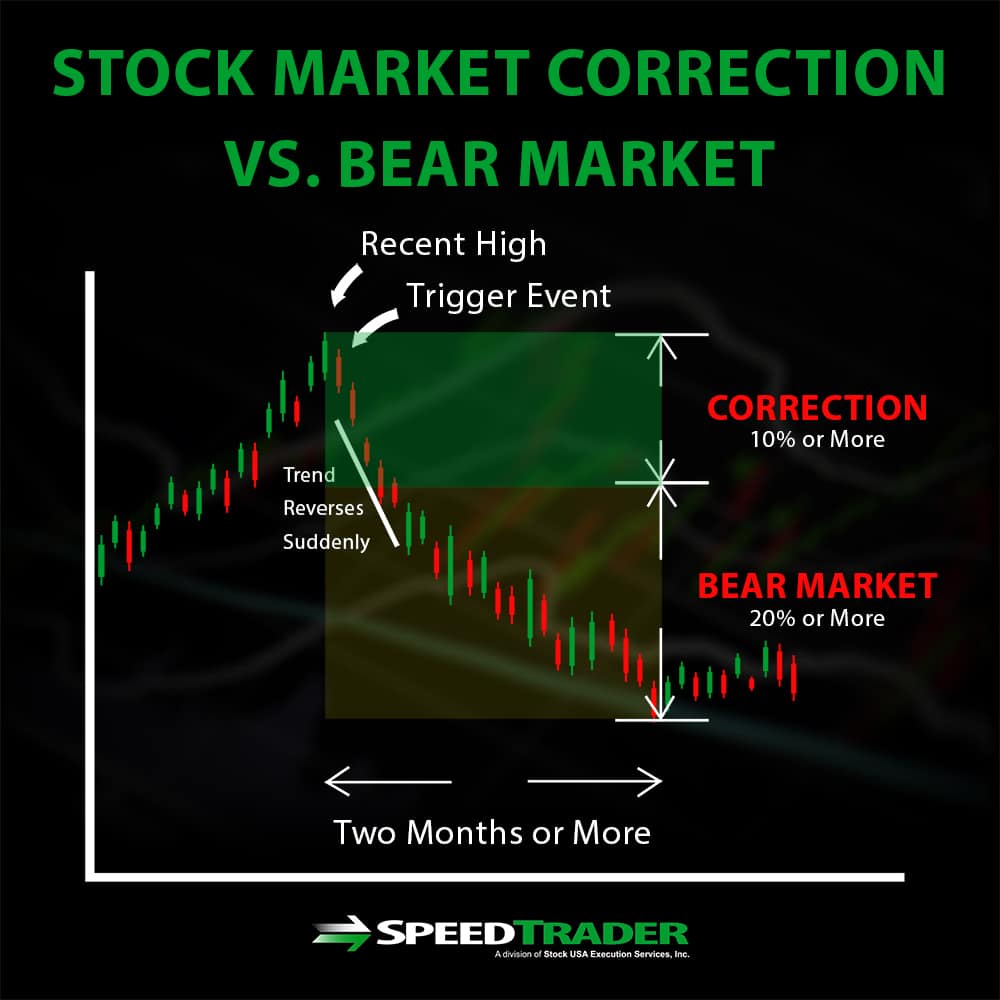 What to do During a Stock Market Correction

The most important thing to remember during a stock market correction is that it is likely to last only a few weeks and that the market is likely to recoup and surpass any losses incurred during the correction. For investors who are holding stocks for the long-term, it is critical not to lose sight of the larger timeframe beyond the correction. Avoid panicking and think about opportunities to minimize losses while staying true to your long-term strategy.

One of the nice things about stock market corrections is that they can provide an opportunity for low-priced entries into stocks that are likely to rebound strongly following the correction. However, timing the bottom of a correction is extremely difficult and entering too early can result in significant pain in the short-term. Consider your risk tolerance and long-term strategies for any stocks before entering during a correction.

Although it is important not to panic, that does not mean that you should blindly hold on to positions during a correction. This can be a good time to realize gains, even if they are less than they were a week before. It can also be necessary to take a loss in order to minimize an exposed position that may leave you in trouble if the correction continues into a bear market.

Stock market corrections can be either a bonanza or a major loss for traders who are willing to take on risk. The most important aspect of trading during a correction to keep in mind is that corrections are somewhat unpredictable, so exercise caution and understand that the risk to every position is magnified compared to during a bull market. However, as for long-term traders, trading off the bottom of the correction can lead to significant gains.

The caution in trading a correction comes in several ways.

First, avoid unfamiliar territory. Trader should stick to stocks and strategies that they have studied previously and which they are confident are strong enough to rebound after the correction. Second, avoid overnight holds. Large investment firms and traders around the world are responding to the correction after market close, so it is highly possible to wake up to a significant loss before the following day’s market open. Third, avoid excessive margin trading and leveraged positions. Margin and leverage are risk magnifiers, as is the correction itself. Using margin and leveraged options during a stock market correction can leave traders significantly exposed if they are not applied with extreme caution. 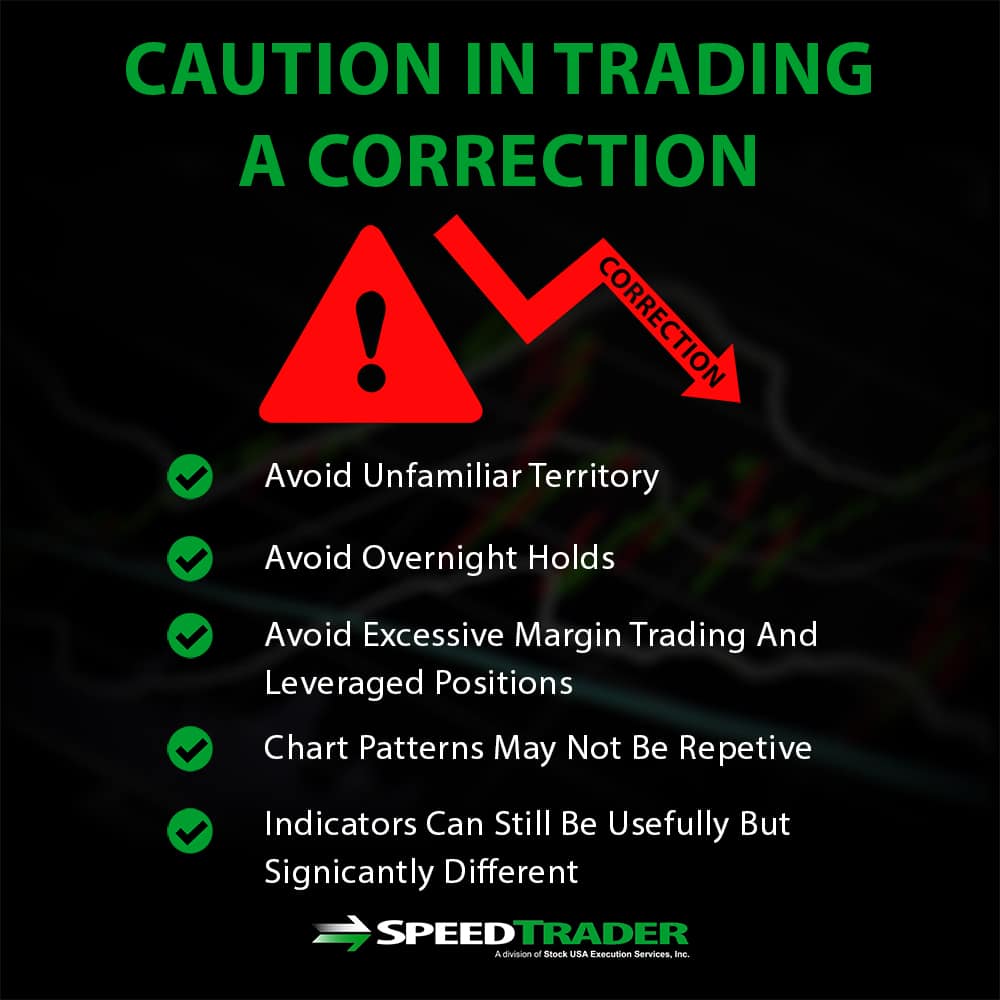 Understand that stocks may not trade in the same patterns during a correction as they would during a bull market. Although technical analysis is still a useful tool, indicators cannot account for panic selling overnight or the amplified intra-day volatility that occurs during a stock market correction.

With all that said, stock market corrections can be a significant opportunity for traders. Because of the greater volatility, especially intra-day, stocks trade in a broader range than they normally might. Risk-tolerant traders can play off this broader range of prices to buy low and sell high repeatedly throughout the correction period.

Stock market corrections can seem scary – after all, no one wants to watch their brokerage account drop by 10% or more. However, the majority of market corrections are healthy for the stock market and return to a bull market after several weeks. For long-term investors who can stay true to their strategy and not give in to panic, corrections represent a minor blip and a chance to make bargain-priced entries. For traders, the risk is magnified, but so is the reward as the increased volatility means that stocks are trading across a broader price range than normal.